Dear All: Three important documents were released at / during / around the World Economic Forum meeting that occurred this week in Davos.

First and foremost, we have the final report from DRIVE-AB. It’s a substantial document and you’ll need to set aside an afternoon to read it. As a way to get started, my 11 Sep 2017 blog post provided a good overview of DRIVE-AB’s conclusions and also offers a downloadable PowerPoint lecture containing the key ideas. In brief, the multidisciplinary DRIVE-AB team has:

That we’re making at least some progress on AMR-related work already is shown by the second report on our tour, 2016 R&D summary released by the AMR Industry Alliance. Per their progress report, Alliance companies invested > USD 2 billion during 2016 in R&D dedicated to a wide range of AMR-related products that include therapeutics, vaccines, diagnostics, and other preventative products. This is of course good to see, but the 48 traditional and the 32 non-traditional antibiotics in all phases of development as of Sep 2017 is certainly dwarfed by comparison with the more than 600 oncology drugs in Phase 2 or beyond (I could not find a good number for Phase 1).

The third report on our tour doesn’t speak to direct incentives but rather to the important role that planning for stewardship and access for new antibiotics will play in acceptance and implementation of meaningful Pull incentives. Provided by the Access to Medicines Foundation, the first AMR Benchmark Report shows that companies are working on priority pathogens, setting limits on antibiotic discharges, decoupling bonuses from sales volume, and tracking resistance. It’s not a surprise that the efforts are somewhat uneven across companies, but the trends are there and are encouraging.

Putting it all together, this figure from the DRIVE-AB reports shows that we’ve seen an impressive array of Push efforts implemented in the past two years: 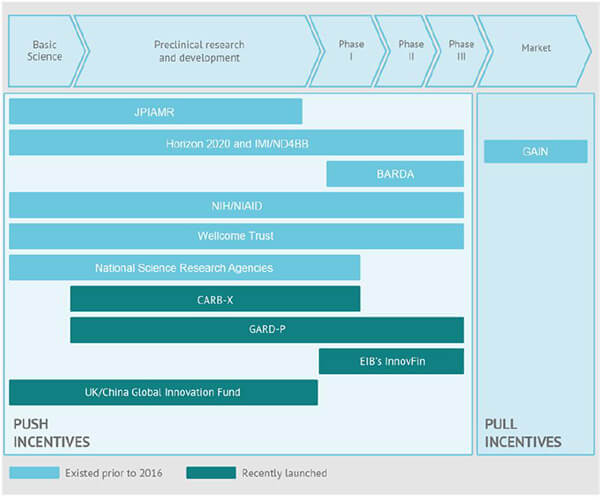 But, you’ll immediately note that the Pull side of this figure is pretty lonely with only the GAIN Act in the United States keeping the box from being entirely empty.

The real question now is thus about global creation of strong Pull incentives and that’s where I hope that ripples from Davos will begin to drive this during 2018 and beyond. Every report reaches the same conclusion about the critical role of Pull incentives: 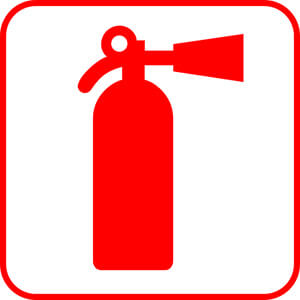 So, we now must work hard to make Pull happen and this requires us to focus on the pivotal role of antibiotics as the fire extinguishers of medicine.

Without antibiotics, there is no treatment for cancer, no ability to care for premies, hip replacements are high-risk ventures, and much more.

But, we don’t pay for fire extinguishers only when we use them — indeed, we much prefer to admire them and NOT use them … except in the knowledge that they are available. Similarly, we simply must stop paying for antibiotics on a per fire basis … this simply makes no sense and is not sustainable.

And while ~$1b per new antibiotic sounds like a lot of money, it’s important to look at other examples of cooperative international funding. The International Space Station had a cost in 2010 of $150b (and an astronaut/day cost of $7.5m). The CERN Large Hadron Collider cost ~9b to build and requires another $1b/yr to operate. So, it is possible!

I don’t exactly know how the needed Pull incentives will come about and there are still questions to be answered: Should all antibiotics get the same reward? If not, how do we created and adjudicate a suitable differential scale? Once you decide to provide a reward, how do you deliver it to the innovator? Different mechanisms would seem likely to be required in different territories (e.g., transferable exclusivity seems to make a lot of sense in the US due to its 100s of payors but single-payor countries would likely use a single central mechanism). And, how do you connect all this stewardship and access provisions in the developing world?

14 Apr 2018 update: Kevin Outterson has written an excellent Op-Ed in STAT News on these themes. Please check it out!
​

OK, so lots of questions! But, that fact that we’re talking about it so openly is a huge advance over where we were 5 years ago. It really takes my breath away when I think about how far we’ve come. Yes the next steps are hard, but the path is open … and the journey of a 1,000 miles does indeed begin with its first few steps! Push! Pull! Push! Pull! Heave! Ho! Onward! 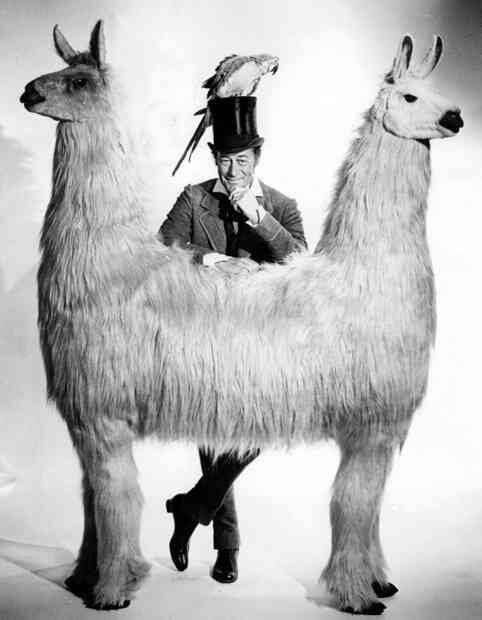 Upcoming meetings of interest to the AMR community:

Dear All, I’ve written before about the AMR Action Fund (9 Jul 2020 newsletter): In brief, it is ~$1b pledged by over 20 leading pharmaceutical companies to support the Phase 2-3 studies needed to bring 2-4 new antibiotics to approval by 2030 Stated differently, the AMR Action Fund provides Push incentives for Phase 2-3 to complement the Push Incentives

Dear All (and with thanks to Kevin Outterson for co-authoring), We’ve written and talked before from various perspectives about the groundbreaking UK NHS England-, NHS Improvement-, and NICE-sponsored antibiotic subscription pilot project: 10 Feb 2021: Fabulous 5-minute video explainer on the economics of antibiotics by Andrew Jack of Financial Times Superb discussions of Push/Pull, the role

Dear All, Andrew Jack of the Financial Times (FT) has produced a superb 5-minute video explainer of the AMR challenge! Featuring cameos from Kevin Outterson (CARB-X), Christine Ardal (Norwegian Institute of Public Health), and Manica Balasegaram (GARDP), the video deftly illustrates the economic challenge, the way that delinked Netflix-like models provide a solution, and the

Dear All, Launched in 2016, the Antimicrobial Stewardship Program (ASP) at the Center for Infectious Disease Research and Policy (CIDRAP) of the University of Minnesota works to provide support globally to the the infectious disease community via such diverse activities as ASP-oriented podcasts, webinars, journal clubs, and other resources. CIDRAP itself is directed by the

Supported by the Wellcome Trust