Dear All (wonkish note alert … top-up your coffee and settle in!),

Today we have a tour of a recent paper in Clinical Infectious Diseases in which FDA presents a very instructive analysis of endpoints used in recent CABP (Community-Acquired Bacterial Pneumonia) trials and how data such as these might permit further convergence of global regulatory requirements.

As is often the case, a bit of context will be helpful. Here’s the reading list that I’ll use for our tour:

—-
First stop: The new paper from FDA (link) shows strong concordance of early and late endpoints for CABP. For reasons discussed at length in the deep dive papers (if you do not know the back story, I strongly encourage you to read at least the first of those papers), George Talbot led a group of us during 2010-2012 on a project that validated both (i) a well-defined & reliable endpoint as well as (ii) a time for that endpoint that (iii) could be tied to high quality data showing the treatment effect of antibiotics relative to no antibiotics for both CABP and ABSSSI.

For CABP, progressive improvement in 4 symptoms (cough, dyspnea, chest pain, and sputum production) during the first 4 days on therapy was found to be a suitable measure. These symptoms are thus the basis of the Early Clinical Response (ECR) measured at 3-5 days after starting therapy that FDA uses as the basis for its analysis of trials of new agents for CABP.

Importantly, FDA uses ECR at days 3-5 because (i) data from the early antibiotic era suggest the greatest treatment effect is observed in this window, and (ii) those same data provide a robust justification for the statistical underpinnings of a non-inferiority trial (for more on this, see deep-dive paper #3, link). However, ECR at days 3-5 is also somewhat counter-intuitive as (i) the patient is not finished with therapy, (ii) late complications (e.g., empyema) won’t manifest by this point, and (iii) what really matters to the patient is ultimately completing the full course of therapy and returning to full health (for more on this, see Talbot’s discussion in paper #4, link.)

In part because of these concerns, other agencies (EMA, PMDA) use an overall clinical outcome at a test-of-cure (TOC) visit 5-10 days after the end of therapy. And, FDA also analyzes the late overall outcomes and includes those data in product labeling: for an example of this, see Section 14.1 of the omadacycline label (link).

As a consequence of these regulatory differences, a modern global trial of a new agent for CABP will include measures of both of these endpoints. As it makes good biological sense that the two endpoints would align, the presumption was that the different measures would give similar demonstrations of efficacy when these paired endpoints entered global usage.

And, the message of Bart et al. is that this is indeed true: the two endpoints are very concordant in their analysis of data on 4,645 patients from 6 recent trials. Here’s the key table:

As you can see, 85.6% (78.3% + 7.3%) of patients had identical early and late endpoint outcomes and likewise, similar numbers (8.4% and 6.0%) had discordant outcomes. The positive predictive value (PPV) of early success was high at 93% but interestingly the negative predictive value (NPV) of early failure was only 46% … pretty much a coin toss as to whether you’d go on to have an overall successful late response after not having responded in the first few days.

FDA analyzed the subjects with early success + late failure discordance (6.0%) in detail and found that prior antibacterial therapy, C. pneumoniae infection, S. aureus infection, and severe chest pain predicted this outcome. Discordance due to prior antibacterial therapy is especially interesting as it suggests that even a single prior dose of a short-acting antibiotic (the limit for these trials) could produce a misleading early success. (Aside: the potential for prior antibiotics to confuse trial results is a big point of concern … see Pertel et al. CID 2008;46(8):1142-51, link, for the best-studied example of this effect.)

There’s not a lot of discussion of the opposite discordance (early failure + late success), but one can speculate that patients not doing well at Day 4 may have had their therapy changed.

—
Second stop: OK, so what does this mean for drug developers? Well, FDA notes this insight could set us up for global regulatory convergence for CABP trials. As noted above, developers currently need different statistical analysis plans for different agencies. Could we one day collapse them into a common set of endpoints? And if non-inferiority margins could be made the same, we’d arrive at a common design for global trials.

Further, the 3rd and 4th papers in the reading list suggest this might also be possible for ABSSSI  (Acute Bacterial Skin and Skin Structure Infections) — I’m not going to review the data at length, but FDA uses an early response endpoint of lesion size after 48h for ABSSSI that was shown in a secondary analysis of the two tedizolid registrational trials to have good concordance with a standard late clinical response endpoint.

—
Third stop: Other insights from these papers. As an aside, there is an interesting observation about use of mortality as an endpoint in CABP discussed both in the Bart paper and in Talbot’s editorial. This approach is sometimes suggested as (i) 30-day CABP mortality rates for large surveys typically are > 10% (e.g., Peyrani 2020, link or Garcia-Vidal 2008, link), (ii) mortality has unequivocal clinical relevance, and (iii) Day 28 all-cause mortality is already used for HABP/VABP (Hospital- and Ventilator-Associated Bacterial Pneumonia).

In conclusion, the analysis by Bart et al. shows definitively that mortality rates in CABP trial participants simply do not reach this level and that mortality will never be a practical endpoint. Across the 4,645 patients in the pooled trials, the 976 with class IV PORT baseline scores (PORT is a severity score that runs from I to V) had a mortality of 3.7%. This is so low that it would take 3,000 PORT IV patients to run a meaningful trial. And although the PORT V patients had a mortality of 14.3%, there were only 28 PORT V patients enrolled across the entire set of six trials … it would never be feasible to run a study only in that subgroup of patients.

—
Many thanks to our colleagues at FDA for providing this instructive analysis. And while I’m at it, let me again thank George Talbot for his many years of leadership of the various projects that underpin all this work.

John H. Rex, MD | Chief Medical Officer, F2G Ltd. | Operating Partner, Advent Life Sciences. Follow me on Twitter: @JohnRex_NewAbx. See past newsletters and subscribe for the future: https://amr.solutions/blog/. All opinions are my own.

PS: Despite the difficulties of this area, our community continues to grow. One measure of this is that the subscriber list for this newsletter has just passed 2,000 readers all over the world: the map shows a guess about the location of your fellow readers (darker = more). Many thanks for being part of this journey! 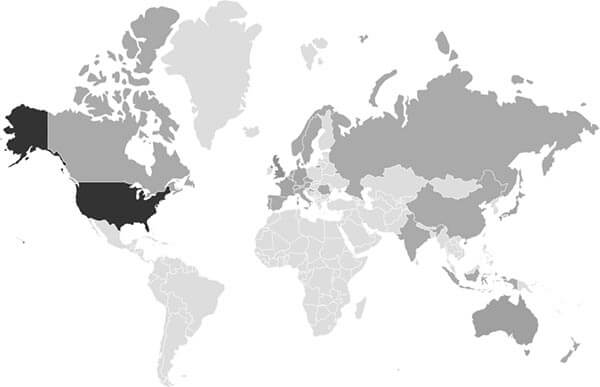 Upcoming meetings of interest to the AMR community:

Dear All (lots and lots of wonkish detail here, be sure your blood caffeine level is adequate!), During the 24-28 Aug 2020 BEAM Alliance-sponsored AMR Conference (go here or see below my signature for more), I had the opportunity on 27 August to chat with Sumati Nambiar (FDA) and Marco Cavaleri (EMA) about ongoing regulatory activities. The

Dear All, IDSA (Infectious Diseases Society of America) have today released an eagerly awaited new guidance document on treating infections due to resistant Gram-negative bacteria (link). The thing that makes this document unusual is that it is an expert guidance rather than a formal guideline. Although there is value in formal guidelines that carefully review

Dear All (and with thanks to Kevin for leading the charge on this newsletter), While listening to last week’s BEAM-sponsored AMR Conference (really a wonderful conference, thank you Team BEAM, go here to listen to the sessions), we tumbled onto a really, really disturbing trend: New antibiotics are not being registered or sold in Europe in

Dame Sally and #RescueTheLobster: Meetings past and present worth your time

Dear All, There’s a tidal wave of meetings for you to note! Some have already occurred but can easily be attended via webcast and others are coming. The detailed list is in the meetings calendar (below my signature) … here are highlights of the more recently added meetings: Fans of Dame Sally (i.e., all the

Supported by the Wellcome Trust